Add Strobes to the UPair One

I purchased these strobes from Flytron in the UK.   I bought 1 pair of stobes with wires attached and cut off the signal wire because I wouldn't be needing that.  It's incredible the amount of light that these led's put out but the power consumption is still low.

I mounted mine in the battery compartment because there is lot's of space next to the battery and I wanted my strobes to face outward rather than downward for collision avoidance.  These strobes are for other pilots to see and not necessarily people on the ground.  I used epoxy to mount them on either side of the fuselage and added a dip switch to turn on either strobe or both.  I figure I didn't want to run them during daylight hours, just in the twilight hours required by the FAA for collision avoidance. 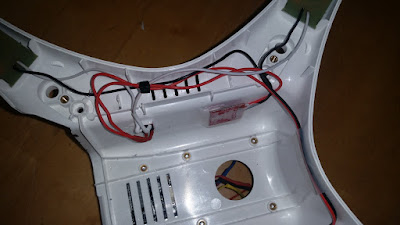 Although I epoxy'd both strobes and the dip switch into the body of the drone.  I also added cellophane tape over the strobes to keep them in place if the epoxy breaks from vibration.  They are only attached by a small ring of epoxy on the lens of the LED.  I figured that it wouldn't hurt.

Also, I decided to use power directly to the navigation LEDS circuit board,  there are two holes in my navigation LED boards that were perfect to attach the strobes in parallel to the existing Navigation LED's.  Take note though Positive (+) is on the pad with the square and Negative (-) is on the pad with the round solder pad.  I traced these visually and it turned out that they were backwards.  The strobes didn't work when I first powered the drone on and after breaking out my voltmeter, I figured that I had wired them in backwards.  Reversing the polarity fixed it.

The wiring provided on the UPair is of a lower gauge than the flytron strobes so they definitely want the 1000ma for 20ms but I'm betting that the UPair can provide this along with the power to run the Navigation LED's.  For now it's working fine.  I'll let you know if I fry the navigation lighting circuitry but my gut feeling is that it will be ok.


Thank you Olaf at Drones4Life for the information provide to accomplish this mod.

Susie, my beautiful and wonderful wife recorded this video on her cell phone the night that I first flew the strobe mod.  After it got darker, it was even better!


Update July '17 - Today, I never land my Phantom and rarely land UPair on the ground.  The potential for a tip-over is non-existant when you hand-catch your drone.  As long as you don't reach under it and allow it to tip towards you but rather keep it above your head and reach up to it, hand catching can be done safety.