Despite all of the warnings about massive traffic jams we decided to travel from Brighton, Colorado to Arthur, Nebraska which was in the path of totality.   We ran into some morning fog on I-76 that was pretty thick in places, but the traffic was normal and when not slowed by fog, we were able to drive the speed limit heading towards I-80 and while heading back home.  On this route, the crowds failed to materialize.


I decided to fly the P3P during totality and capture a panorama of the area but as it turns out, I forgot to press 'Record' after landing the drone and inserting a fresh battery at 2 minutes and 30 seconds before totality!   All I can say, is that you had to be there.  Even these guys that recorded the space station transiting the sun during the eclipse, forgot to take the lens cap off of their telescopes because of the awesomeness of the event!  I got some good video, but theirs is better.  Watch this video too.

Posted by Unknown at 1:03 PM No comments:

I suppose that it had to happen, I purchased this refurbished P3P from Amazon on June 14th but at 108 flights and 15.25 hours flight time, but my P3P developed two rather substantial stress cracks in the rear arms, just where everyone else is experiencing them after only 57 days!

In my opinion, these cracks aren't caused by overtightning the two frame screws just inside the motor mount screws.  These are specifically made not to stress the plastic by using stand-off screws.  These screws have a large barrel that slips through the plastic and compresses agains the metal insert in the upper shell.  The lower shell shouldn't be stressed by these.  No, In my opinion, the plastic formulation of the aircraft body, perhaps aided by the lack of rigidity in the join of top and bottom halves is the culprit and that can only be solved by re-designing the top and bottom enclosures.   I suspect that is why DJI added the plastic "locks" on the P3, to help bind the top and bottom shells together.

I decided to repair my drone rather than use the warranty replacement that is available (My drone is less than 2 months into a 12 month warranty period) because of the delay I've read about, (6-8 weeks) and partially because I believe that DJI will just use new but defective cases to fix the issue.  I want to fix the issue and not just delay it's re-occurrence.

BTW - I know, I should have rotated my phone to take this video.  Oh well, next time.

I've decided to go with the Plast-Aid fix.  This seems like it will strengthen the arms sufficiently and beyond that, I've decided to apply a tape element to join the top and bottom enclosures of the fuselage and make them a single component.   I don't want to glue the top to the bottom because of the difficulty of separating them in the future, but I want to select a strong adhesive tape that will strengthen the enclosure.

Well, my Bondic arrived before the Plast-Aid so I fixed the cracks with Bondic.   Amazing stuff, but my wife said that she's been using this for 30 years now and I just should have borrowed some of her UV nail polish!  I'm pretty sure it's not the same, but Bondic really works great to stop the cracks.  3-4 seconds of the UV lamp and Bondic solidifies very well,  I sanded the arm and it looks as good as new!  I still want to add a bit of Plast-aid to the lower arm before flying again, but this looks like it will be a good fix.

So after adding the Plast-aid, this is what my lower rear arms look like. 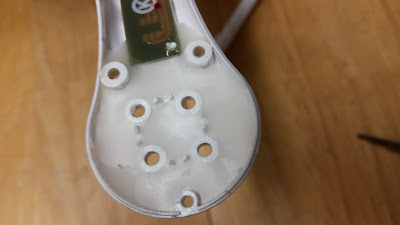 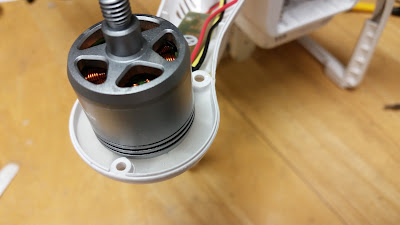 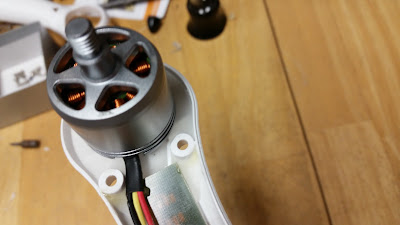 Update: Now at 128 flights and 3 hours additional flight time (18h 02m 27s total flight time).  The rear motor mounts aren't showing any additional signs of cracking.  Either in the existing cracks or in any new areas.  I'll be inspecting these arms closely over the next few months and let you know if I see anything.

Update: Now at 149 flights and another 3-4 hours of flight time.( 21h 47m 08s) of total flight time.  I've located two VERY small cracks emanating from the two frame screws opposite of the original cracks that I applied the smallest amount of Bondic to check them from spreading.  These are trivial associated cracks but worth logging.   Overall, I'm pleased with the Plast-aid/Bondic repair protocol. The rear motor arms are very solid and seem to be fixed well but cracks on the Phantom are an issue to be sure.

Update: 169 flights and 25 hours total flight time.  No additional cracking and the rear arms are still very solid!  61 additional flights and 10 hours of flight time since the repair.  I bought a new Phantom 3 Pro shell, just in case this didn't work, but now I'm sure that if I do change the case, that I'll make sure to fill the lower arm motor mounts with Plast-aid prior to mounting the motors.  This stuff looks like it works great and fixes the problem.

Update: 199 flights and 30 hours total flight time.  This is an additional 15 hours of flight time and there's no further cracking, so I think these arms are essentially fixed.  If new cracks occur, I don't believe that they will be related to the original cracks.  I would heartily endorse using Plast-aid and Bondic to repair rear arm cracks in the Phantom 3 pro.  It appears to work well!

Posted by Unknown at 8:10 PM No comments: